I thought that Sassafras Mountain was steep, but I soon found that Justus Mountain is steeper. (Maybe I’m still just exhausted from Sassafras, – – – – but of course I would never admit that.)

And then I found this: 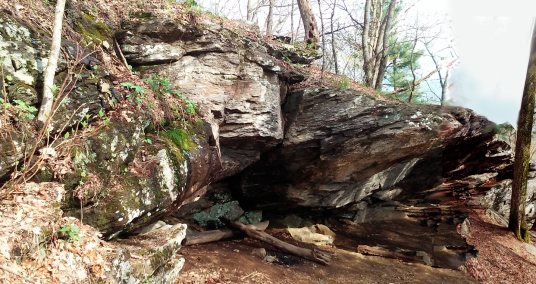 This was just off the Trail a ways, and irresistible to my exploration instinct. Besides- – -What could go wrong??? So I decided to investigate with a forty pound pack on my back.

The overhang was neat and was probably a good place to camp, (in fact it looked like someone had already done so at some point) but I was set on getting to Gooch Mountain Shelter so I decided to push on.

This is when reality reared it’s ugly head.

I discovered that carrying a forty pound backpack down a steep incline and across a narrow path with a thirty foot drop-off on one side, was not the same as carrying the same one back out. (I found that I’m a bit squeamish about heights and the stability of 80 year old legs.)

The only solution was to take out some of the weight, then lift the individual pieces over a 3 foot shelf, carry them back up to the Trail, and then reassemble the backpack and the piecie-parts I had removed.

About an hour later I was back on my way to Gooch Mountain, after somewhat humbling experience.

On the way to Gooch I crossed Justus Creek and Blackwell Creek where I refilled my empty water containers, and got some pictures. 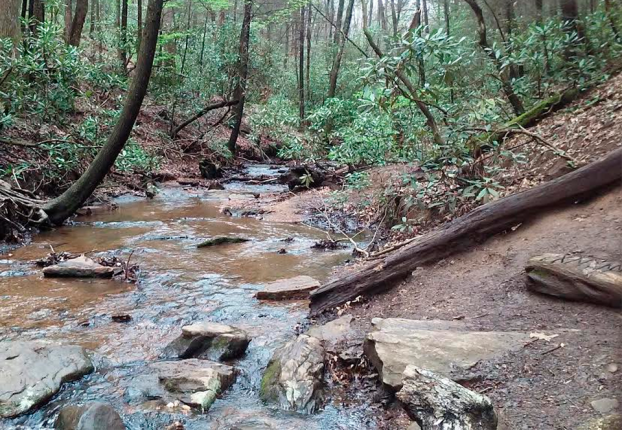 I don’t remember which of these are which, but “Ya Pays Yer money, and Ya Takes Yer Choice”.

I moved on to Gooch Mountain Shelter, and took up residence in the corner again. I figure if there are Bears, they’ll get the guys in the middle first. (Great plan but I was the only one there.)

Incidentally, there was a Barred Owl doing his thing even though it wasn’t quite dark yet, and the rain had cleared for awhile.

See you in the morning,

About The Late Emerging Artist

This is the site of "The Emerging Artist's Newsletter. I use it to track the progress of the Art that I am currently creating. The typical Newsletter publishes once or twice a month, depending of how creative I am at any given time.
View all posts by The Late Emerging Artist →
This entry was posted in Appalachian Trail, Backpacks, Barred Owl, Blackwell Creek, Dumb Old Men, Justus Creek, Justus Mountain, Rock Outcroppings, Sassafras Mountain, Scenery, Walkers Walk-Abouts and tagged Black Bears, Blackwell Creek, Gooch Mountain, Justus Creek, Justus Mountain. Bookmark the permalink.